The data, which analyses the average open banking API response times across 10 of the UK’s top traditional banks, reveals that 100% have improved their response speed between 2020 and 2021, in some cases by up to 37%.

At the end of 2021, cumulatively over 26.6 million open banking payments had been made in the UK, an increase of more than 500% in 12 months. Where higher volumes would typically result in higher latency, faster response times across the board indicate that banks have invested heavily in open banking’s underlying infrastructure during this time.

Yapily’s figures also reveal that last year, the average API response time across UK banks was 511 milliseconds, an improvement of 28% from 2020, with the OBIE recording a 60% increase in user adoption over the same period from 2.8 million to 4.5 million.

However, it’s important to remember that response speed is just one aspect of improving the UK’s open banking ecosystem.

"Over the next 12 months, banks, fintechs, and Technical Service Providers (TSPs) alike will need to continue to invest in open banking architecture. In order to increase adoption, improving API reliability, uptime and user journeys will be key as this will ultimately have the biggest impact on improving conversion rates,” he adds.

NatWest, RBS and AIB had the fastest API connectivity in 2021, with an average speed of 340 milliseconds. The most improved banks in the last 12 months include Barclays, who saw a 37% reduction in average response time; M&S, who achieved 35%; and AIB, who saw 33%. 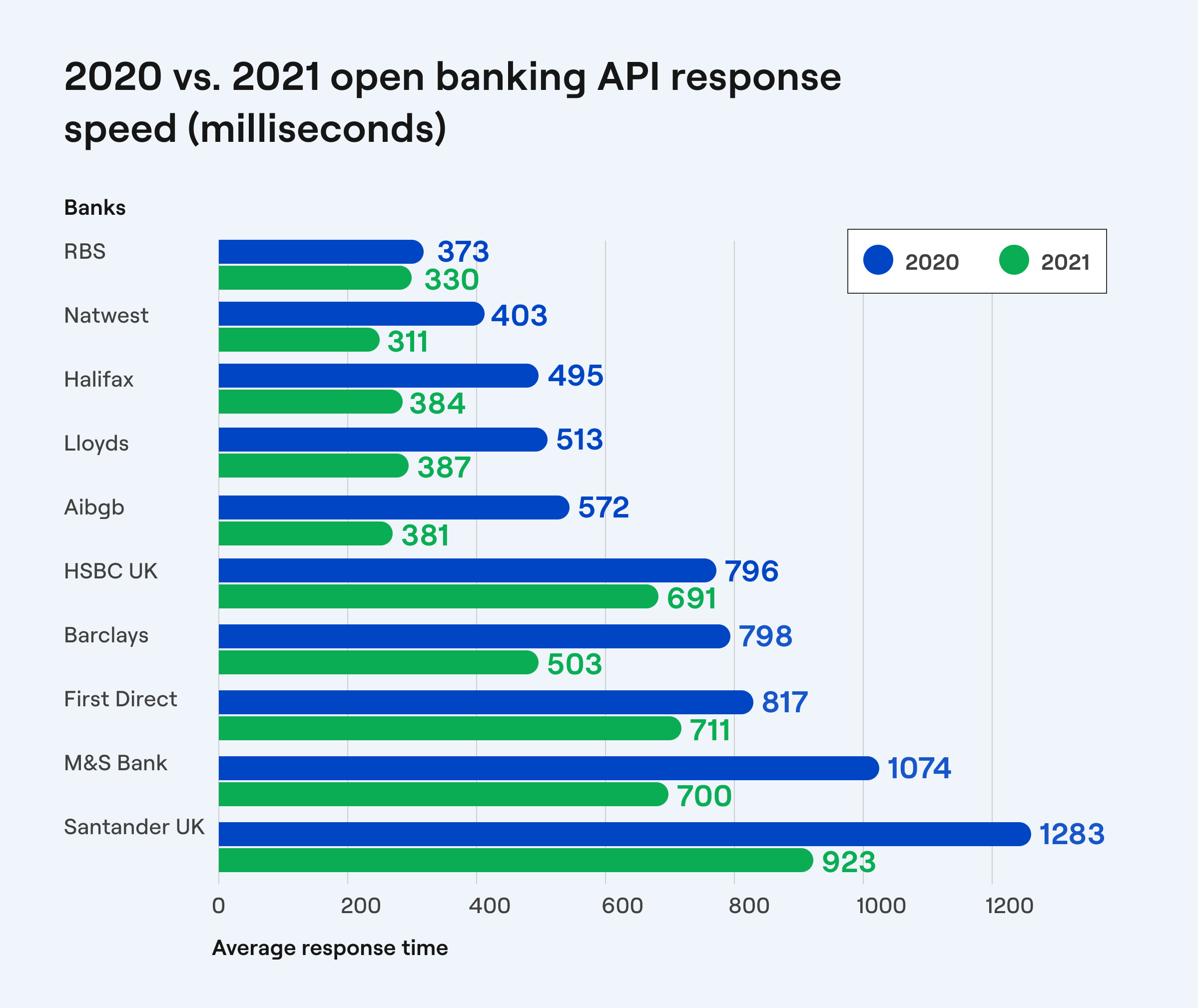 Stefano Vaccino, CEO and Founder at Yapily comments: “To measure the success of open banking, we need to look at both user adoption and the quality of the infrastructure underpinning the wider ecosystem. The implementation of open banking in the UK has always been reliant on the readiness of the CMA9; with strong improvements in year-on-year API response times, this evidence is a positive indicator for the direction of travel and maturity of open banking in the UK.

“In 2022, I expect to see continued improvement across the UK banks as they develop and launch new APIs and functionalities, enabling more innovative use cases. In the wider ecosystem, we will see account-to-account payments compete even more closely with existing payment methods like credit and debit cards. And at some point in the near future, we will have seen a major platform integrate open banking into their payment workflow, giving rise to an inflection point in consumer adoption.”

Yapily’s API insights exclude UK challenger banks due to the volume of data transferred when compared with a traditional bank. The data was compiled and monitored throughout 2020 and 2021 by Yapily’s API platform. The company’s infrastructure is used by some of the world’s leading companies such as American Express, IBM, Intuit Quickbooks, IRIS Software Group, and more.

It’s been quite a year. There have been olympic records broken, female leaders elected, and our first human flight to space.

Not to be outdone, open banking had a pretty big year too.